Why is it important for children to learn about food waste?

Food waste that is sent to landfill sites doesn’t breakdown, it releases harmful greenhouse gases that can damage the earth’s atmosphere. Through the workshops we’ve found that children are already aware of sustainability issues such as plastic however are not yet aware of food waste as a sustainability issue. By educating children at a young age we hoped to foster positive eating habits that will become the norm as the children get older.

How did the programme manage to engage kids in sustainability?

We incorporated experiential learning throughout the workshops where the pupils learn through doing; they were actively involved as ‘food waste warriors’ monitoring weekly food waste in the lunch hall and identifying the main foods wasted. We also used interactive elements such as smoothie making and board games. To make pupils feel actively involved in their learning they were given a chance to make decisions about the school campaign day, giving them ownership of the campaign.

How did the programme make sustainability education relevant and easy to understand for children?

When devising the workshops we worked with a panel of teachers to ensure the content was cross-curricular and in-line with current pedagogies therefore relevant to what the pupils were already learning. The pupils utilised maths skills when we compared the weekly school food waste audit; they learned about science through discovering that food waste produces methane which is a harmful greenhouse gas; and they utilised their English skills when creating campaign posters for their whole school campaign day.

What kind of campaigns did the children run, how was this made possible?

Each school was given a choice between a variety of campaign day approaches which involved hosting an event for the whole school including parents, pupils, teachers and kitchen staff. In workshop four the pupils were given autonomy to make decisions about the events, including who to invite, where they should take place and what activities to run to share their learning with the wider school community. The campaign days were pupil-led with each pupil running activities on the day.

Campaign days included using smoothie bikes so pupils could make a smoothie made from bruised and wonky fruit and give them out at the school gates; crowdsourcing a leftovers recipe book from parents in the school, supported by the catering companies and kitchen staff, and one school chose to launch a community fridge, which collected surplus food and offered parents and pupils free food from the fridge. Each school received a £500 budget to spend on their campaign day and a team of Small Change Big Difference staff were on hand to manage logistics on the day.

What were the positive outcomes of the programme?

The project measured impacts from pupils, parents and teachers using a combination of surveys, focus groups and food diaries, the results of which are now available via the evaluation case studies.

We have also observed positive responses, with pupils going over and above in their learning, some schools even created their own songs about the campaign and performed them in assemblies and in the school playground. It had a big impact at home; through the home-school books we gave out pupils completed exercises with their parents and so were teaching their parents what they have learnt in school. Many parents ordered food caddies and started recycling their food waste off the back of the workshops. It also had a knock-on effect in the school canteen as some kitchen staff amended their meal planning and reduced their food ordering following the school food waste audit results. 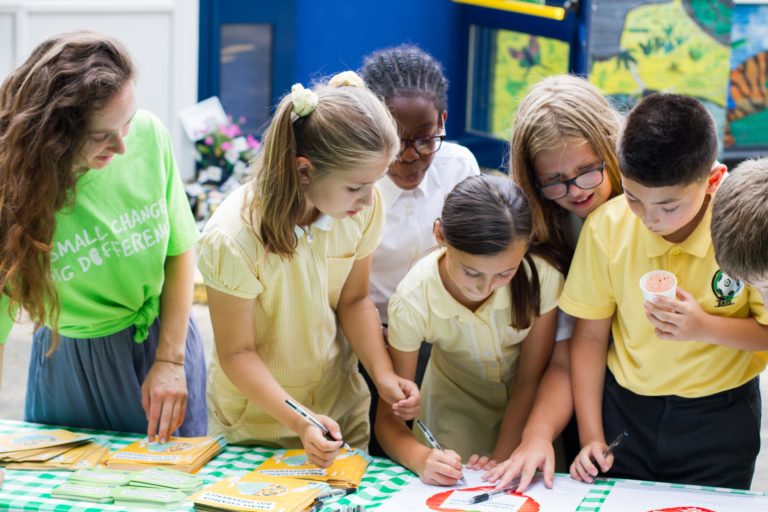